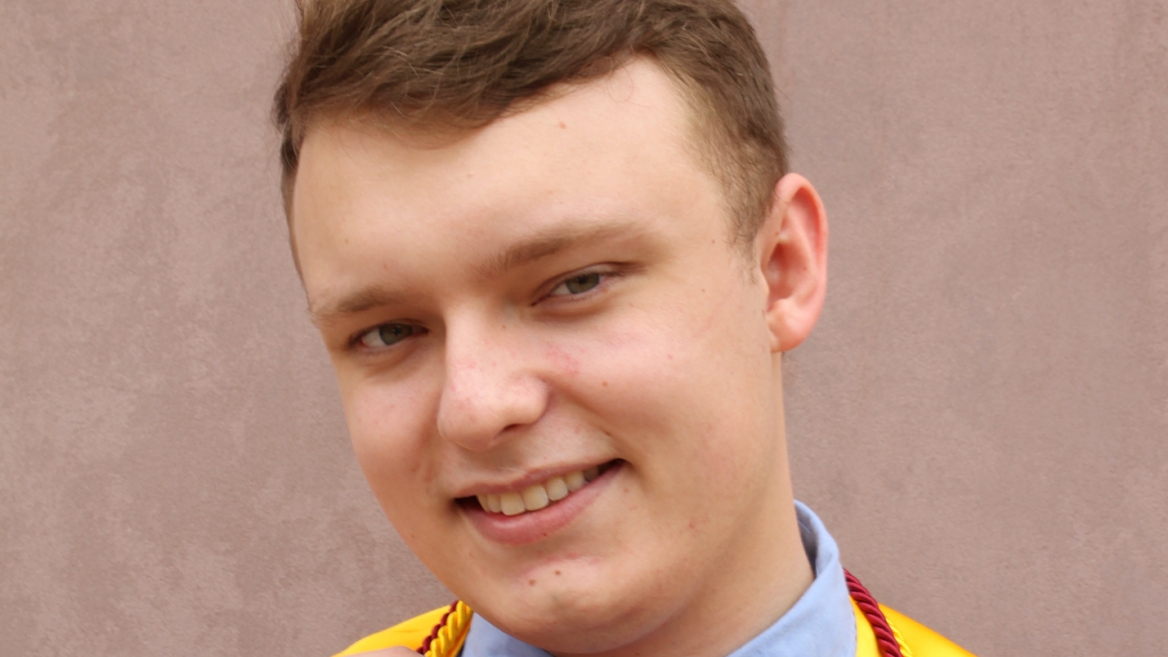 Editor's note: This story is part of a series of profiles of notable spring 2021 graduates.

Jackson Carpenter is the recipient of the 2021 Charles Wexler Mathematics Prize, the highest honor a mathematics undergraduate can receive. He is graduating this month with a Bachelor of Science degree in mathematics and a minor in Spanish.

Carpenter is a Phoenix native and attended the International Baccalaureate program at North High School. His parents worked in education while he was growing up, and his father currently teaches history at North. With his parents both alumni, Carpenter was naturally attracted to Arizona State University. Barrett, The Honors College was a big draw along with the generous New American University National Merit Scholarship he was awarded.

Although his first few semesters of college were interesting, he didn’t truly understand what advanced mathematics would look like until he took an honors section of MAT 300 Mathematical Structures with Don Jones, associate professor of mathematics and associate director of undergraduate programs in the School of Mathematical and Statistical Sciences.

Jones quickly became a mentor, and Carpenter continued to sign up for classes he taught. In his MAT 371 class, Jones supervised an honors contract on Dedekind cuts, Carpenter’s first exposure to mathematical writing and doing something in the realm of extracurricular research.

During the summer after his sophomore year, Carpenter participated in his first REU (research experience for undergraduates) through the Mathematical and Theoretical Biology Institute (MTBI) at ASU, which focuses on topics of epidemiological modeling and applied mathematics. This program gave him a taste of what it means to do research at the graduate level, collaborating with a research team and even submitting work to scientific journals. His group was selected to present at the 2019 Society for Advancement of Chicanos/Hispanics and Native Americans in Science (SACNAS) Conference, and in November he traveled to Honolulu, Hawaii, to present their research poster. He is the co-author on a manuscript on social and environmental influences and intervention programs on the dynamics of homelessness, which is currently under review for publication

In spring 2020, Carpenter traveled to Mexico City, Mexico, to study abroad at the National Autonomous University of Mexico (UNAM). He took math classes in Spanish, mixing his mathematics major with Spanish minor.

“Being fully submerged in a foreign society was shocking, but it was even more refreshing to see the universality of math and how it transcends cultural and geographical boundaries,” said Carpenter. “The friends I made at the College of Sciences at UNAM were some of the most talented mathematicians I’ve met. A different native language had no impact on their mathematical aptitude. This is one truth I will carry with me throughout my mathematical career.”

Carpenter’s senior year at ASU was consumed with the completion of his undergraduate Barrett honors thesis. He again worked with Jones, and also professor John Quigg, on a textbook/supplement for MAT 370 and similar courses in the realm of introductory real analysis.

“I was certainly very impressed with Jackson’s quick and sure progress writing his thesis. At every meeting he would have a new chapter written, and it was always quite polished,” said Quigg.

With his experience working at various tutoring centers around campus, Carpenter wanted his thesis to focus on a class that does not receive as much recognition as the calculus sequence.

“In a way, my thesis was a much longer version of my honors contract that I did for MAT 371 and is something that I am very proud of. I hope to keep it with me as a living document for future mathematical endeavors,” said Carpenter.

The Charles Wexler Awards were established in 1977, in memory of Professor Charles Wexler, with a gift from his wife, Helen, to honor his accomplishments in the field of mathematics and his contributions to the School of Mathematical and Statistical Sciences. Wexler was the founding chairman of the Department of Mathematics at ASU. At the time of his retirement, he had accumulated 47 years of service, the longest period of faculty service in the university’s history. In 1977, the A-Wing of the Physical Sciences Center was named after Wexler in appreciation of his outstanding service to the university from 1930 until 1977.

Due to the COVID-19 pandemic, the 44th annual Charles Wexler Awards ceremony was changed to a smaller online format. Jonathan Wexler, son of Charles Wexler, was able to join from Sunnyvale, California, via Zoom.

Carpenter is graduating with an excellent cumulative GPA of 4.16. This is even more impressive given the challenging courses he has taken, including groups, graphs, complex analysis, advanced linear algebra, abstract algebra, real analysis, numerical analysis, topology, partial differential equations at the undergraduate level, and real analysis at the graduate level.

“Mr. Carpenter is an outstanding student and a most deserving winner of the Charles Wexler Mathematics Prize,” said Donatella Danielli, professor and director of the School of Mathematical and Statistical Sciences.

“I am so pleased to have gone to ASU for my undergraduate degree. I have learned that education is what I make of it, regardless of where it happens,” said Carpenter. “I plan on taking the rich, varied experiences ASU has offered with me to Boulder, Colorado, in the fall and start the next stage of my educational career.”

We asked Carpenter to share more about his journey as a Sun Devil.

Question: What was your “aha” moment, when you realized you wanted to study the field you majored in?

Answer: It may seem cliché, but I knew math was my favorite subject since early elementary school. It was the subject that I knew I was the best at and it was always the homework that I wanted to do first when getting home from school. In high school, with more of a perception of what college was, I knew that math was the subject that I wanted to focus on and learn more about.

Q: What’s something you learned while at ASU — in the classroom or otherwise — that surprised you, that changed your perspective?

A: My half-semester — thanks to the pandemic — of studying abroad in Mexico City was one of the most eye-opening experiences I had studying math. As all of my math classes were given in Spanish, I was able to truly test my skills in math but also my Spanish fluency. What I took away from this experience was understanding the universality of mathematics. Language and geographic boundaries had no effect on the mathematical aptitude of the friends I made while abroad. I gained a much wider perspective of math in an international context.

Q:  Which professor taught you the most important lesson while at ASU?

A: I'm not sure this was a lesson he ever explicitly taught, but Dr. Don Jones always presented material formally but never without a fair share of levity. I would like to think Dr. Jones has informed my teaching style while tutoring and how I approach learning math in general: while still formal, mathematics does not need to be boring.

Q: What’s the best piece of advice you’d give to those still in school?

A: Don't be afraid to reach out for help, whether that be to friends, professors, advisers, tutoring centers, etc. Asking for help is by no means an admission of weakness or stupidity. Sometimes a different person's perspective or understanding of a topic may sync better with how you learn.

Q: What is most misunderstood about mathematics by the general public?

A: I think that most people easily write themselves off as "not good at math" and abandon any attempt at learning it. Math, like any sport or activity, takes effort and practice in order to become proficient. I would like people to understand that no one understands difficult math concepts instantly.

Q: What was your favorite spot on campus, whether for studying, meeting friends or just thinking about life?

A: I always enjoyed sitting in the breezeways of Wexler hall working on homework or studying between classes. Seeing friends and professors milling about solidified the feeling of community in the department. My favorite place on campus is probably the Social Sciences building just south of the LL building. Its greenery and cool, shaded environment was always a nice escape from the heat.

Q: Do you identify as part of any underrepresented group in mathematics? If so, how has that impacted your experience?

A: I do identify as part of the LGBT community, and although it didn’t make much of an impact in my studies or work environments, mainly because I never brought it up, I would like to see more queer representation in STEM in general. I hope to be a bit more vocal about my sexuality in the future and show other queer mathematics students that there are people like them out there.

Q: What do you like to do in your spare time, when not studying or doing school-related tasks?

A: Playing the clarinet was always a creative escape for me during high school and college. I intend to get involved in playing music again in grad school, hopefully after things are "back to normal" pandemic-wise. During the pandemic, I've been trying to keep up with all of the Netflix original series coming out, some of my favorites being “Ratched” and “The Queen's Gambit,” for sure.

Q: If someone gave you $40 million to solve one problem on our planet, what would you tackle?

A: After hearing the tragic news of Arkansas banning treatment for transgender youth, I would like to focus on providing support for the vulnerable trans communities across the country, whether through legislation reform or providing free treatment and hormone therapy.