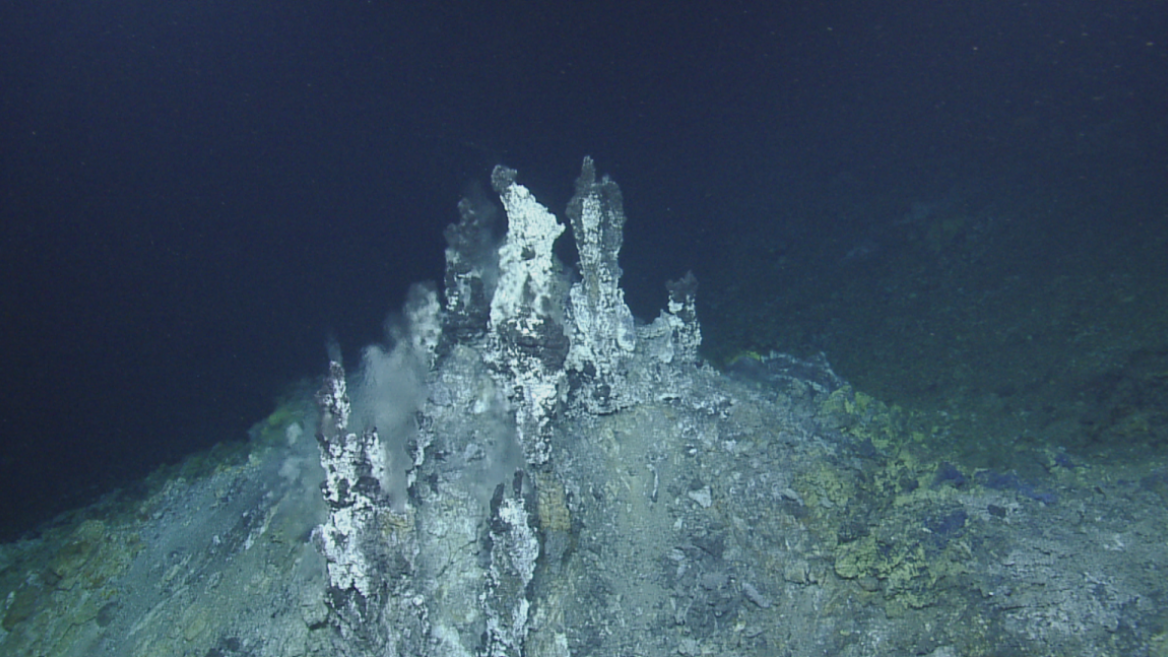 New possibilities for life at the bottom of Earth's ocean, and perhaps in oceans on other planets

In a newly published study, biogeoscientists Jeffrey Dick and Everett Shock have determined that specific hydrothermal seafloor environments provide a unique habitat where certain organisms can thrive. In so doing, they have opened up new possibilities for life in the dark at the bottom of oceans on Earth, as well as throughout the solar system. Their results have been published in the Journal of Geophysical Research: Biogeosciences.

On land, when organisms get energy out of the food they eat, they do so through a process called cellular respiration, where there is an intake of oxygen and the release of carbon dioxide. Biologically speaking, the molecules in our food are unstable in the presence of oxygen, and it is that instability that is harnessed by our cells to grow and reproduce, a process called biosynthesis.

But for organisms living on the seafloor, the conditions for life are dramatically different.

“On land, in the oxygen-rich atmosphere of Earth, it is familiar to many people that making the molecules of life requires energy,” said co-author Shock of Arizona State University’s School of Earth and Space Exploration and the School of Molecular Sciences. “In stunning contrast, around hydrothermal vents on the seafloor, hot fluids mix with extremely cold seawater to produce conditions where making the molecules of life releases energy.”

In deep-sea microbial ecosystems, organisms thrive near vents where hydrothermal fluid mixes with ambient seawater. Previous research led by Shock found that the biosynthesis of basic cellular building blocks, like amino acids and sugars, is particularly favorable in areas where the vents are composed of ultramafic rock (igneous and meta-igneous rocks with very low silica content), because these rocks produce the most hydrogen.

Besides basic building blocks like amino acids and sugars, cells need to form larger molecules, or polymers, also known as biomacromolecules. Proteins are the most abundant of these molecules in cells, and the polymerization reaction (where small molecules combine to produce a larger biomolecule) itself requires energy in almost all conceivable environments.

“In other words, where there is life, there is water, but water needs to be driven out of the system for polymerization to become favorable,” said lead author Dick, who was a postdoctoral scholar at ASU when this research began and who is currently a geochemistry researcher in the School of Geosciences and Info-Physics at Central South University in Changsha, China. “So, there are two opposing energy flows: release of energy by biosynthesis of basic building blocks, and the energy required for polymerization.”

What Dick and Shock wanted to know is what happens when you add them up: Do you get proteins whose overall synthesis is actually favorable in the mixing zone?

They approached this problem by using a unique combination of theory and data.

By running the calculations, they were able to show that the overall synthesis of almost all the proteins in the genome releases energy in the mixing zone of an ultramafic-hosted vent at the temperature where this organism grows the fastest, at around 185 degrees Fahrenheit (85 Celsius). By contrast, in a different vent system that produces less hydrogen (a basalt-hosted system), the synthesis of proteins is not favorable.

“This finding provides a new perspective on not only biochemistry but also ecology because it suggests that certain groups of organisms are inherently more favored in specific hydrothermal environments,” Dick said. “Microbial ecology studies have found that methanogens, of which Methanocaldococcus jannaschii is one representative, are more abundant in ultramafic-hosted vent systems than in basalt-hosted systems. The favorable energetics of protein synthesis in ultramafic-hosted systems are consistent with that distribution.”

For next steps, Dick and Shock are looking at ways to use these energetic calculations across the tree of life, which they hope will provide a firmer link between geochemistry and genome evolution.

“As we explore, we’re reminded time and again that we should never equate where we live as what is habitable to life,” Shock said.