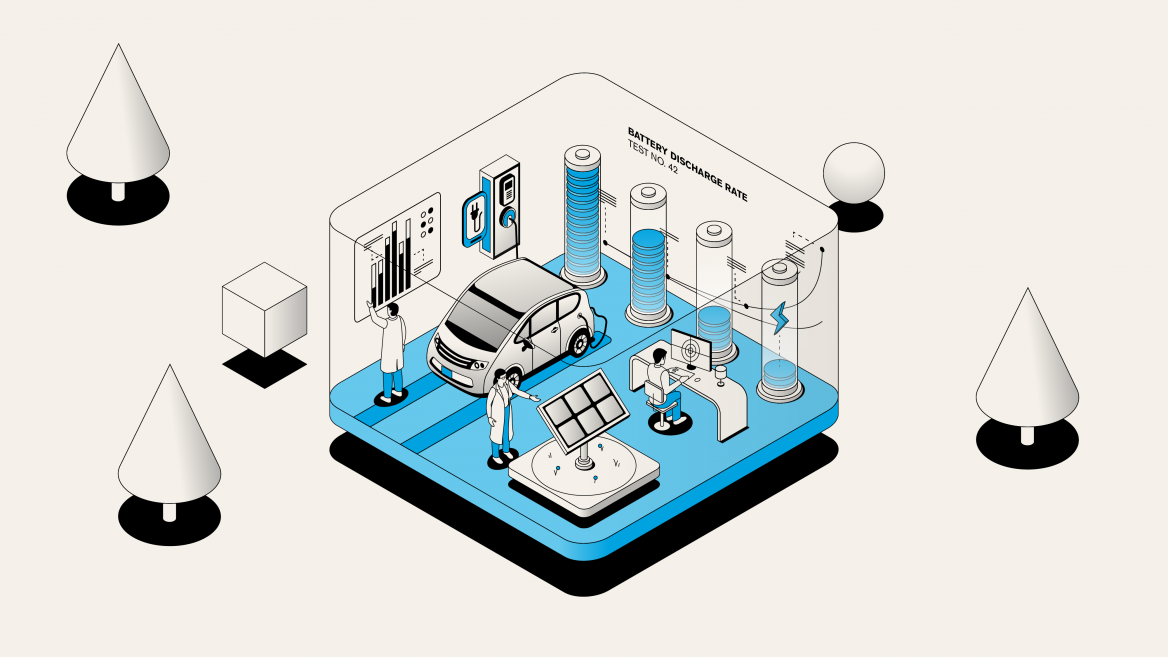 Harnessing the sun, powering the future

Arizona is on the hunt for high-tech industry, and one of the lures are five science and technology centers being built by Arizona State University.

The centers are a key part of the New Economy Initiative, an ambitious plan conceived by government, industry and civic leaders to bring the state to the forefront of technological innovation.

To prosper, the 21st century needs more. Technology moves quickly, but ASU’s status as a research university means faculty work on the very cutting edge of it.

ASU has already launched two of the science and technology centers, or STCs. One is the MADE (Manufacturing, Automation and Data Engineering) STC; read about it here.

And the other — the AMPED (Advanced Materials, Processes and Energy Devices) STC — is focused on the three key components needed to electrify the entire energy sector, from automotive to the utility grid: photovoltaics (solar), batteries and power electronics.

AMPED is directed by Zak Holman, an associate professor in the School of Electrical, Computer and Energy Engineering. The center is located in ASU’s Research Park in Tempe.

Those three components are needed in considerably larger scale than they’re available now, and with much more flexibility and capability. AMPED works on the materials, converting them into devices, then using those systems in products.

At the Research Park, the heavy facilities and equipment to work on that is available. The solar fabrication lab is being augmented with new battery fabrication and test facilities and new semiconductor tool sets to boost power electronics research.

Using these labs and tools, researchers will work on things like the switches for charging an electric vehicle (or discharging one) or converting the DC power generated by solar to the AC power that’s used in the grid. How do you generate more power per area for a solar panel? Efficiency is a key cost driver for the cost of solar power (and an important metric by which manufacturers compete against each other).

As Elon Musk famously said, “Batteries suck.” How do you store more energy per battery? Energy isn’t the only issue. How fast can you charge or discharge the battery? Accelerating in an electric car isn’t dependent on how much energy is stored in the batteries.

“How fast can you get the energy out?” Holman said.

That’s a challenge that goes to the level of the materials, how they’re arranged and how they work together.

Batteries are a huge reason renewable energy isn’t what it could be yet. How many batteries would be needed to charge all day and then power the city of Phoenix overnight? How about powering a place that gets very little sun in the winter and charging batteries during the summer?

“Think of the size of the battery needed for one vehicle,” Holman said. “And then you start asking, what would I need to power a city for hours, let alone weeks? And it's huge.”

Two drawbacks to batteries are energy density and power. How far can your electric car go on one charge? That’s energy density. How long does it take to charge it? That’s power. No one wants to go on a road trip and spend two hours waiting for the car to juice up.

Working through these puzzles is the work of this new center.

So how do the science and technology centers operate? How do they work with companies?

It starts by funding collaborative research projects with companies. Twice a year the STC holds a proposal day. ASU faculty and people from industry get together and define both what the state of the art is, what the gaps are and what's needed. What are the pressing problems within the areas of solar batteries and power electronics? (At the last proposal day in February, about 170 people showed up.)

The STC directors and the thrust leads, who are the faculty in charge of the batteries and car electronics concentrations within the STCs, write a funding opportunity announcement. That says any team that has an ASU principal investigator and a company that has agreed to co-invest in a project is eligible for funding by the STC and can apply with a proposal to the announcement. Those then get reviewed by a panel of both ASU and industry representatives, and projects will be selected for funding. Those will be projects that are one to two years in length. It doesn't even have to be an engineering faculty member.

It could be someone from the business school doing work on the critical supply chain for battery materials, for example, as long as they have a company that has agreed to co-invest in the project.

“We require buy-in commitment from companies,” Holman said. “And on the other hand, the companies get access to brilliant ASU minds, potential workforce in students who could become future employees, with the STC covering a lot of the cost of the associated research and the projects they care about.”

Companies can also invest in state-of-the-art infrastructure that enables work within and outside of those projects. Holman said the center is bringing in some new conductor tools that are relevant for power electronics. Those are going in core facilities with STC funding.

The third investment by the center is in education workforce development. That happens in a number of ways. One is hands-on lab training in select areas.

“A great example of that is a program that we call Solar Cells 101,” Holman said. “It's weeklong in the lab, learning how to do every step of solar cell fabrication — module, fabrication and characterization. This program has been running from since before the STCs, and as an inspiration, we're gonna grow it into additional areas like batteries and power electronics. With the STC funding we've had companies that every new employee they hire, they send to ASU to take this starter course before they get started at the company.”

High school students, researchers from other universities and national labs, and people from small and large companies have all taken the course. Federal employees who are program managers participate in the course so that they can better understand the people that they're funding and supporting.

Another part of the workforce development is supporting students through what are called impact engineering fellowships. Those are fellowships for graduate students to go spend time at a company or at another organization doing something beyond the scope of their regular research as a graduate student but is related, extending the impact of that research. The center funds that.

It’s different from a typical internship because an internship would be paid for the company on a project for the company. It could be a semester- or summerlong project defined by the graduate student, their adviser and the company in concert with that student's research, but might involve using the facilities at a company.

A final part of the workforce development piece is entrepreneurial fellowships for students and postdocs who are creating new companies and new ventures based on STC research.

“We have a strong entrepreneurial ecosystem at the university,” Holman said. “So there is funding to support businesses being launched based on STC innovation. Those are all the things that the STC is doing with the state's money to bring about the new economy.”

More about the NEI