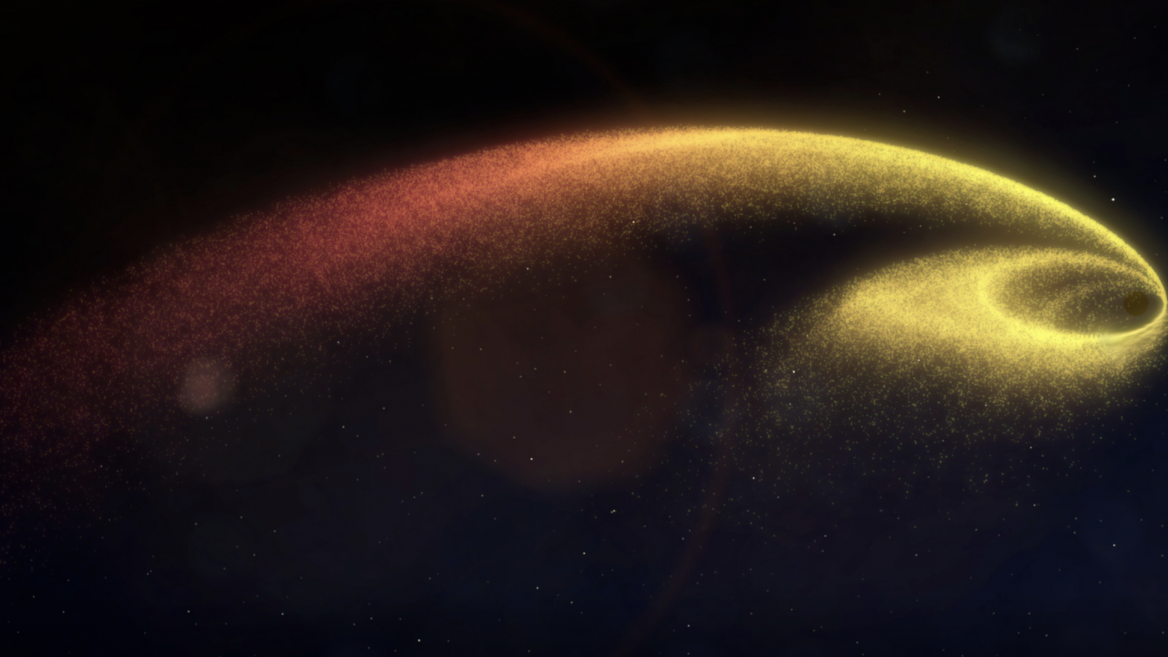 Tracing back a ghostly particle from a star-shredding supermassive black hole, scientists have uncovered a gigantic cosmic particle accelerator. Some 700 million years ago, subatomic particles called neutrinos were hurled at nearly the speed of light toward Earth as a result of a peculiar cosmic encounter: A star wandered too close to a supermassive black hole and was ripped apart by the black hole’s colossal gravity.

Part of the star’s debris eventually fell back onto the black hole, causing a luminous flare.

Scientists think that this phenomenon, called a tidal disruption event (TDE), could accelerate particles to nearly the speed of light. Those particles then collide with light or other particles to generate high-energy neutrinos.

Neutrinos are fundamental particles that far outnumber all the atoms in the universe but rarely interact with other matter. Astrophysicists are particularly interested in high-energy neutrinos, which have energies up to 1,000 times greater than those produced by the most powerful particle colliders on Earth. The first confirmed high-energy neutrino source, announced in 2018, was a type of active galaxy called a blazar.

The newly observed neutrino from the tidal disruption event is the first that can be traced back to a black hole. This scientific result was made possible by a large collaboration of theoretical and experimental scientists from Arizona State University, University of Wisconsin-Madison, Humboldt University, NASA, the Zwicky Transient Facility (ZTF) on Mount Palomar, the South Pole’s IceCube Neutrino Observatory and the Deutsches Elektronen-Synchrotron (DESY) in Germany.

A team led by DESY scientist Robert Stein reports the observation in the journal Nature Astronomy. A theoretical model developed by Walter Winter, from DESY, and Professor Cecilia Lunardini, from Arizona State University's Department of Physics, was published in the same issue of Nature Astronomy.

A chance at reinvention 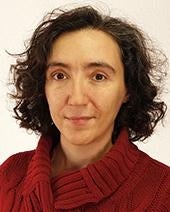 “My collaboration with Walter Winter on TDEs began as my sabbatical project in 2016,” Lunardini said. “Walter kindly offered to host me at DESY (supported by a scholarship of the Deutscher Akademischer Austauschdienst or DAAD, which translates as German Academic Exchange Service), so I spent three months of my sabbatical leave there.”

Life in Berlin proved to be reinvigorating — but not completely without its challenges.

“While working at DESY, I experienced life in beautiful Berlin — which was quite enriching — and coped with the harsh German winter. I had moments when I really missed the sun of Arizona!”

Lunardini and Winter first turned their attention to black holes as sources of high energy astrophysical neutrinos and published their theoretical work in 2017.

“My main scientific goal was to learn the basic physics of high-energy neutrinos from Walter, since my main expertise lies more on neutrinos in the low energy regime,” Lunardini said. “I decided to explore the possibility that TDEs might produce neutrinos because there was only sparse literature on the subject, and so I saw the possibility to publish a more detailed study on this subject.”

Winter added: “At that time, we hypothesized that the observed diffuse astrophysical neutrino flux might be powered by TDEs, but none of us expected that one actually find a neutrino from such a specific object so soon.”

A long time ago in a galaxy far, far away…

The neutrinos began their journey some 700 million years ago, around the time the first animals developed on Earth. That is the travel time the particle needed to get from the far-away, unnamed galaxy (catalogued as 2MASX J20570298+1412165) in the constellation Delphinus (the dolphin) to Earth.

Scientists estimate that the enormous black hole could be as massive as 30 million suns.

“The force of gravity gets stronger and stronger, the closer you get to something,” Stein explained. “That means the black hole's gravity pulls the star's near side more strongly than the star's far side, leading to a stretching effect. It’s the same process that leads to ocean tides on Earth, but luckily for us the moon doesn't pull hard enough to shred the Earth.”

About half of the star's debris was flung into space, while the other half settled on a swirling disc around the black hole. This "accretion disc" is somewhat similar to the vortex of water above the drain of a bathtub. Before plunging into oblivion, the matter from the accretion disc gets hotter and hotter and shines brightly. 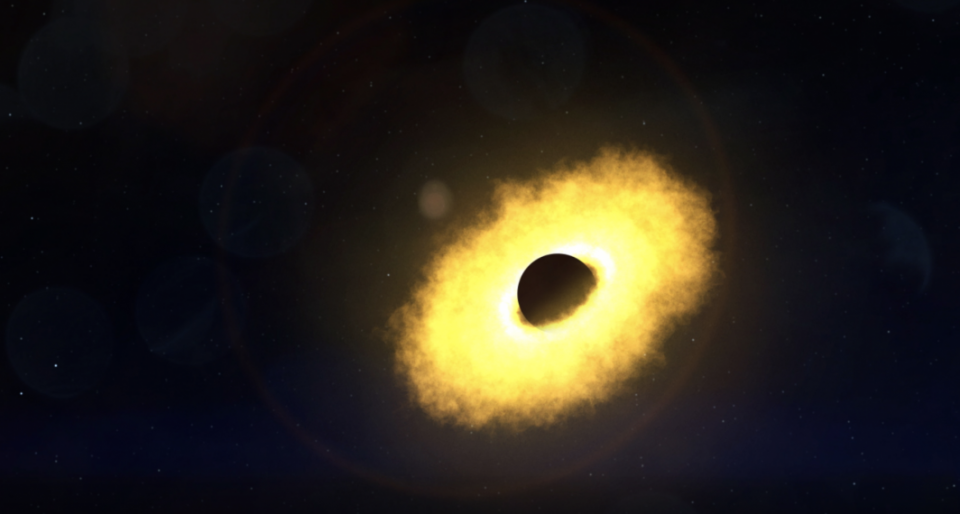 In some cases, the black hole launches fast-moving particle jets. Winter and Lunardini hypothesized that tidal disruptions would produce high-energy neutrinos within such particle jets.

“Jets are a known, energetically favored sites where particle acceleration in astrophysical objects can occur, which we need here for the neutrino production," Winter said.

A flash of light

On April 9, 2019, a flare was first detected by the Zwicky Transient Facility on Mount Palomar in California and peaked a few weeks later on April 30. It was identified as a tidal disruption event, and named AT2019dsg.

Half a year later, on Oct. 1, 2019, the IceCube Neutrino Detector at the South Pole registered an extremely energetic neutrino from the direction of AT2019dsg.

“It smashed into the Antarctic ice with a remarkable energy of 200 teraelectronvolts,” said co-author Anna Franckowiak from DESY, who is now a professor at the University of Bochum. “For comparison, that's about 30 times the energy of the protons in the world's most powerful particle accelerator, the Large Hadron Collider at the European particle physics lab CERN near Geneva.”

Yet, the extremely lightweight neutrinos — often referred to as ghost particles — hardly interact with anything, and are able to pass unnoticed through not just walls but whole planets or stars. So, even catching just one high-energy neutrino is already a remarkable observation. Analysis showed that this particular neutrino had only a 1 in 500 chance of being purely coincidental with the TDE. The detection prompted scientists to detect further observations of the event with as many instruments as possible across the electromagnetic spectrum, from radio waves to X-rays.

“This is the first neutrino linked to a tidal disruption event, and it brings us valuable evidence,” Stein explained. “Tidal disruption events are not well understood. The detection of the neutrino points to the existence of a central, powerful engine near the accretion disc, spewing out fast particles. And the combined analysis of data from radio, optical and ultraviolet telescopes gives us additional evidence that the TDE acts as a gigantic particle accelerator.”

The observations also demonstrate the power of exploring the cosmos via a combination of different "messengers" such as photons (the flares of light in the night sky) and neutrinos (detected at the South Pole). This methodology is known as multimessenger astronomy.

“The combined observations demonstrate the power of multimessenger astronomy,” said co-author Marek Kowalski, head of neutrino astronomy at DESY and a professor at Humboldt University in Berlin. “Without the detection of the tidal disruption event, the neutrino would be just one of many. And without the neutrino, the observation of the tidal disruption event would be just one of many. Only through the combination could we find the accelerator and learn something new about the processes inside.”

The data are best explained by an energetic outflow of fast jets of matter shooting out of the system, that are produced by the central engine of the black hole and that last for hundreds of days.

“The picture that emerged from the observations shows a several months-long flare, with spectra observed in both the optical, UV and X-ray frequencies,” Lunardini said. “In our work, we have demonstrated that a jet is an option to naturally explain the neutrino observation, its energy and time of arrival.”

The cosmic accelerator spews out different types of particles, but apart from neutrinos and photons, these particles are electrically charged and thus deflected by intergalactic magnetic fields on their journey. Only the electrically neutral neutrinos can travel on a straight line like light from the source toward Earth and so, become valuable messengers from such systems.

The association of the high-energy neutrino and the tidal disruption event was found by a sophisticated software package called AMPEL, specifically developed at DESY to search for correlations between IceCube neutrinos and astrophysical objects detected by Mount Palomar’s ZTF.

The ZTF was designed to capture hundreds of thousands of stars and galaxies in a single shot and can survey the night sky very rapidly. At its heart is the 1.3 m diameter Samuel-Oschin Telescope. Thanks to its large field of view, ZTF can scan the entire sky over three nights, finding more variable and transient objects than any other optical survey before it.

“A noteworthy element is that out of the 17 TDEs in the ZTF sample, only four were found to have a counterpart in X-rays; of these, AT2019dsg was the one with the highest sustained (over several days) X-ray luminosity,” Lunardini said. “This assumption is attractive because it links the neutrino production to AT2019dsg being particularly bright in X-rays. In our interpretation, the unusually high X-ray luminosity of AT2019dsg is the reason for the efficient neutrino production, which implies that X-ray-bright TDEs might also be neutrino-bright.”

The ability of the ZTF telescope and South Pole neutrino detector to tag-team for multimessenger astronomy promises an exciting future in the years ahead.

“Since our start in 2018 we have detected over 30 tidal disruption events so far, more than doubling the known number of such objects,” said Sjoert van Velzen from Leiden Observatory, co-author of the study. “When we realized that the second brightest TDE observed by us was the source of a high-energy neutrino registered by IceCube, we were thrilled.”

For Lunardini, a case of following her passion for lifelong scientific learning during a sabbatical leave has laid the foundation for an exciting period of future discoveries.

“I knew that there would be future observations of TDEs, but I could not know if they would actually lead to anything interesting for neutrinos. I told myself that, ‘Well, either something interesting will come out of this, or in any case I will have learned useful skills that could be applied to other phenomena.’ So, I viewed this mostly as a learning opportunity and not necessarily something exciting per se.

“So, I can say I got lucky! Now the topic of neutrinos from TDEs is exciting, and I am eager to see how it develops further in the next several years.”

Top photo: What happens when an unlucky star strays too close to a monster black hole? Gravitational forces create intense tides that break the star apart into a stream of gas. The trailing part of the stream escapes the system, while the leading part swings back around, surrounding the black hole with a disk of debris. This cataclysmic phenomenon is called a tidal disruption event. Photo credit: NASA’s Goddard Space Flight Center/Chris Smith (USRA/GESTAR)