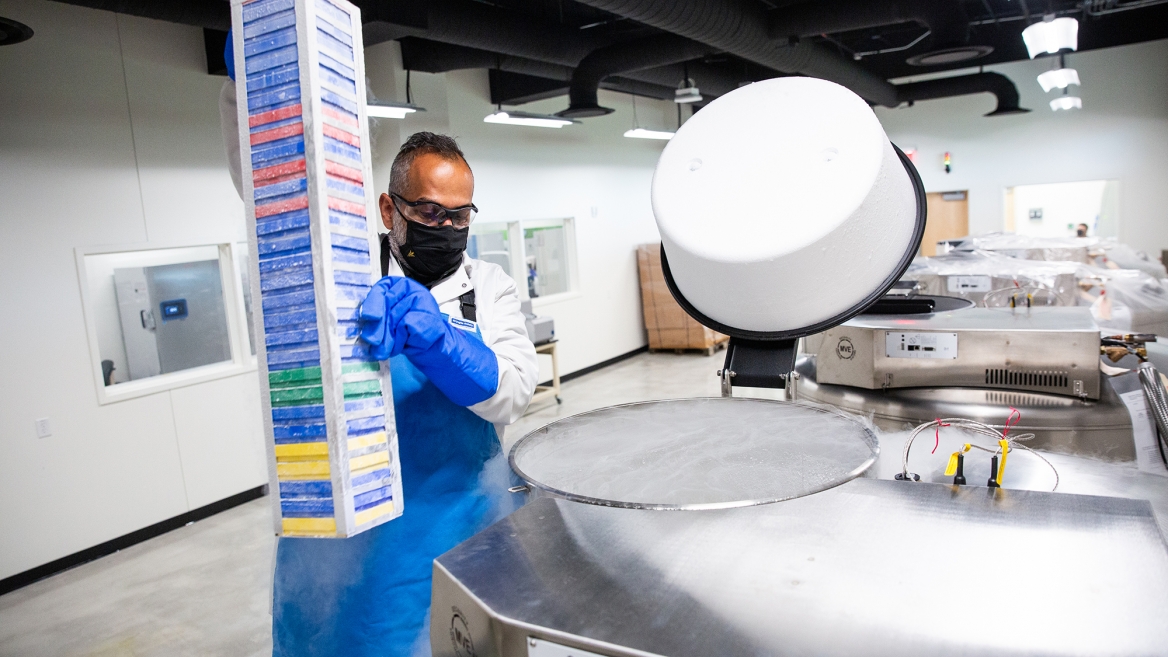 A deep dive through time to study changing ecosystems

In 1999, ecologist J. Michael Fay spent 465 days hiking 2,000 miles across the Congo Basin of Africa while surveying the ecological and environmental status of the region. His feat became known as the MegaTransect.

In ecology, a transect is a survey of the flora and fauna of a particular area. It’s like putting a place in a test tube.

A three-decade transect through time is being funded by the federal government, and Arizona State University is playing a part.

But slowly swelling its ranks is a special collection. Instead of most biological samples, where the intent is to learn more about the individual organism, this is a transect through time; a three-decade attempt to better understand how U.S. ecosystems are changing.

The National Science Foundation's National Ecological Observatory Network, or NEON, is a research project with 81 locations across the U.S., including Hawaii, Puerto Rico and Alaska. The facilities collect long-term, open-access ecological data to observe changes to U.S. ecosystems.

The point is to observe long-term changes to ecosystems, like the abundance and locality of a species. Studying multiple samples simultaneously demonstrates the environmental changes' effects on different kinds of organisms. By studying 70 types of samples, researchers hope to unravel the complexity of the ecological responses to environmental change.

Imagine you give a sample of blood today and another one in five years. What story would it tell about your body? The NEON Biorepository (@NEON_sci) takes a sample of dirt, critters and more from 81 sites around the country to see how the ecosystem changes over time. (1/5 ) pic.twitter.com/RjdywTE3Mw

The 81 field sites across the country are divided among 20 ecoclimatic domains that represent regions of distinct landforms, vegetation, climate and ecosystem dynamics. For instance, Arizona is divided into two areas that could not be more different: the Sonoran Desert in the south and the Colorado Plateau up north.

There are two collection spots in Arizona — one terrestrial and one aquatic: Sycamore Creek northeast of the Valley, a popular camping and swimming spot for decades, and the Santa Rita Experimental Range and Wildlife Area south of Tucson.

The NEON Biorepository at ASU is the primary host of the samples from across the country. Project manager Kelsey Yule shared some numbers: 70 types of samples collected, with more than 100,000 samples coming in the door each year. By the end of the project, 3 million samples will be housed here.

Eight full-time NEON staffers process the samples and store them as they come in.

The collection started receiving samples in late 2018. Most of the samples are pretty small — no one is bringing in a mule deer every year.

“Not a lot of vertebrates get collected,” Yule said.

There are samples of soil, blood, feces and DNA. Many of them go into four liquid nitrogen freezers and 19 mechanical freezers. It’s minus 196 degrees Celsius (minus 321 degrees Fahrenheit) in the nitrogen freezers and minus 80 C (minus 112 F) in the mechanical ones. By comparison, your home freezer is minus 18 C (about zero F). For context, the coldest temperature ever recorded at ground level was minus 89 C (minus 128 F) in July 1983 by researchers at Russia's Vostok Station on the East Antarctic Plateau.

Researchers are already using the material at NEON Biorepository. There are 22 projects ongoing, with samples out on loan. The topics are varied, from using machine learning to study changes in ground-dwelling invertebrate communities across the continent, to understanding nutrient composition and microorganism communities in airborne dust — projects at other universities that the ASU team is helping to facilitate.

"Every specimen or sample that we get from NEON has an online record that anyone can look at what all of the specimens we have here are," Yule said. "They're doing this project in order to allow researchers this really big standardized set of data over the next 30 years, so they can look at how they're changing over space and organisms and in Arizona."